I’ve traveled plenty, for both personal and professional reasons. When flying, I always hope for a smooth ride through friendly skies. 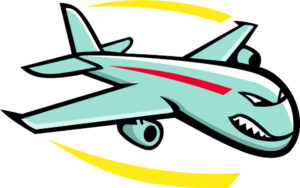 Before I went to Homicide, I was assigned to Special Investigations/Metro, and one of our responsibilities there was fugitive apprehension and extraditions. Every day someone from our unit was boarding a plane heading out to fetch a miscreant.

I remember Bobby Mallon returning from a trip and telling of a horrible, turbulent return flight, one in which the drink cart came off the ground and some of the passengers who were not belted in, banged their heads on the ceiling. While listening with a certain degree of fascination, I could only hope I would never have to experience a trip like that myself. But given the frequency with which we traveled, the odds were that I might.

As much as I traveled at Metro, it paled in comparison to Homicide. There it seemed l was always on a plane to somewhere, following leads, tracking down witnesses, or chasing killers.

On one such trip, my partner and I had boarded an MD-80 (McDonnell Douglas) at Dallas/Fort Worth for our return trip after having spent several days there following leads and overseeing the forensic processing of our suspect’s vehicle. The takeoff felt tentative, as if the jet were struggling to gain altitude, and it seemed that everyone felt it as the cabin grew silent. After a long, labored ascent, we leveled off, banked to the right, and made a wide, sweeping circle, as if we had been going the wrong direction.

The flight attendants were summoned to the cockpit, and soon an announcement that we were returning to Dallas/Fort Worth for “routine maintenance” was made. We all knew there was nothing “routine” about it.

At the time, it seemed those MD-80s were falling out of the sky every week, and the stories of those accidents replayed in my mind as the plane labored to stay in the sky. Everyone remained quiet, all of us likely with the same thoughts about our fate, our loved ones left behind, and the hereafter—everyone probably making their peace and praying for mercy.

It was the worst trip I had ever experienced, until today.

During these travels, I all-too-often think about the Cerritos crash of 1986. Though I hadn’t been professionally involved in any aspect of that disaster, I had heard many stories of it from deputies who were, and from investigators who worked tirelessly with the feds in the horrific aftermath.

I’ve viewed photographs of that scene, and one image I’ve never forgotten is that of the charred remains of a flight attendant, a woman strapped to the rearward-facing seat situated near the main cabin door. Something about that picture haunts me in the way that tragic war photographs are never forgotten: a naked Vietnamese girl running down a road with other children, South Vietnamese forces following behind, and a cloud of napalm billowing in the background.

I’m writing this while flying the not-so-friendly Nevada skies.

A couple of weeks ago, my wife and I flew in and out of Vegas for a quick winter getaway, and the choppy, turbulent flight was no different than it always is coming and going from the desert region ringed by mountains. But today, as I flew into Vegas only to catch a connecting flight, the turbulence was greater than I had ever experienced—any time, anywhere. The violent jolts and jerks and sudden changes of elevation had me cinching my belt a little tighter as we descended into the city that never sleeps.

Two hours later, I’ve boarded my connecting flight and landed a seat in the first row, the result of a low boarding number thanks to a diligent wife who always makes sure I’m checked in at the earliest possible moment.

The cockpit door is open, so from my seat I watch the pilots going over digital images on a laptop-type device while the remaining passengers come aboard. I hear the one on the left say to the other something about the mountain, and he gestures with his hand a sharp banking maneuver as if that might be something they expected or planned to avoid. Either way, they are obviously discussing what they might be up against given the storm that was blowing through the region, the unstable air through which they must propel us.

I felt confident they had a plan, and there was comfort in knowing that they were the experts in this situation. As my buddy Deedub says, let’s go ahead and let Jesse rob the train.

Into the (very) Wild Blue Yonder

We’ve taken off, and it was as exciting as I had anticipated it would be. The two flight attendants are strapped into their rearward-facing seats by the main cabin door—the same configuration as the image I harbor from the Cerritos air crash. We bounce, jerk, and are jolted from side to side, and I meet the gazes of both of them. I see their concern, perhaps fear, and I want to tell them not to worry, that we’ll be fine. I’ve survived more dangerous situations, and not just on planes.

Maybe it was the double Jameson I had consumed during my layover—a tactical move since I knew I was in for another rough leg—or maybe it was an acute awareness from my years as a cop that when it’s your time to go, baby, it’s your time to go. Either way, I put my head back and relaxed, accepting that I was not in control of my destiny.

I switch from country to rock and turn it up, a distraction delivered through Bose headphones. The two flight attendants remain seated, as they would throughout the flight. An announcement is made that we should all do the same, that substantial turbulence was expected all the way into Burbank.

My head is bobbing, and not just from the beat in my ears. I again make eye contact with the flight crew, and there is a shared knowledge passed between us. A connection that can’t be explained, one that comes from being in danger together. It is not unlike many relationships I had with partners throughout the years; we were in this together.

Remembering Another Bad One

I reflect on Texas and a runway lined by emergency vehicles as we returned to the airport those many years ago. Once the plane had powered down after a breathtaking landing, the captain’s voice had come across the intercom, cool and collected, and she welcomed us back to Dallas Forth Worth.

Applause and laughter and cries of relief filled the aircraft. I had wanted to hug the flight attendants upon our exit that day, but instead, I just thanked them. The door to the cabin was open, so I paused there briefly before deplaning, and said to the captain, “Good job, Skipper.”

We come into Burbank against 25-mile-per-hour winds, the jetliner being pushed and pulled by outside forces I can’t see and don’t fully understand. Yet we continue our descent through mostly blue skies and touch down gracefully—as gracefully as one could expect given the conditions.

I pop out of my seat and line up to be first out. Briefcase in hand, I wait as the door is opened and stairs are positioned at the threshold. I again make eye contact with the two flight attendants, and I smile through my mask. “God bless you both,” I offer, the Cerritos image still on my mind.

The cockpit door opens just as I am cleared to deplane. But before I do, I lean slightly toward the flight deck on my way out, and say, “Good job, Skipper.”