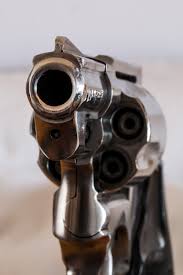 “She’s going to kill us both.”

The big man at the other end of my gun glanced over to see my partner pointing her gun at him—at us—the barrel bouncing in her shaking hands.

It had only been ten minutes since the end of briefing, not the part of the night or the time into your shift when you would usually anticipate a great caper. I had just pulled out of the station parking lot after briefing, vehicle and shotgun inspections, and a quick chat with the rookie cop about tactics and expectations. We had never worked together, and she had just finished her six months of patrol training. It was Firestone Station in the late eighties.

“What do you mean?” was her reply.

“You’re fresh off training. Is there anything you didn’t get to do or see as a trainee, something you hoped to experience but didn’t?”

Shocked, I glanced back and forth from the road to my partner. “You haven’t made any gun arrests?”

“First, drop the sir. Second, who the hell trained you?”

I’ll leave her answer to that question out of the story. She went on to say that her training officer liked making dope arrests and that’s what they focused on. She’d made hundreds of them. She’d already testified as an expert in preliminary hearings. She could write a dope report in her sleep, and she could spot a junkie at a hundred yards. But never a gun arrest while working patrol in South Central Los Angeles. I was stunned. 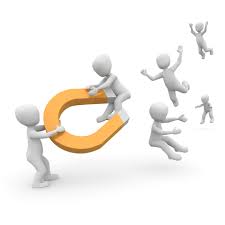 Some people had referred to me as a bit of a shit magnet. It was true. I seemed to stumble upon really bad men doing terrible things at just the right—or wrong, depending on your perspective—times. I used to say I’d rather be lucky than good, and that seemed to be the case for me.

Case in point: Not five minutes had passed since this conversation when I spotted a carload of parolees headed north on Compton Avenue. Okay, we’re not supposed to profile, so let’s just say there were four individuals who appeared to be fresh out of the pen at worst, and street gang enthusiasts at best. They were unfortunate enough to be riding in a vehicle with expired tags—I just happened to notice after flipping a U to get behind them. There was my probable cause.

I hit the overhead red light, but they didn’t yield. I politely tooted our siren to get their attention. It seemed to work; all four looked back, the driver through his mirrors and his passengers craning their necks. Yet on they traveled. I ran the plate over our radio (this was before the days of computers in cars) but before the dispatcher could provide us with the details, the driver veered into a parking lot and quickly came to a stop. We were not far from the Pueblos, notorious housing projects that are home turf to the Bloodstone Villains and Pueblo Bishops. I was glad they stopped before getting there. I told my partner to be ready, these guys were dirty, as we pulled in behind them and bailed out of our vehicle.

“Let me see some hands.” It was a standard order when approaching carloads of hoodlums. In Firestone, many of the locals would have their hands up and even outside of the windows before we were out of our cars, knowing the drill. All but the driver complied with the order. He leaned forward and appeared to be stashing something under the seat. I drew my gun and made the announcement again, zeroing in on the back of his head and issuing a friendly warning of what might happen if he didn’t obey the order. He brought his hands up.

I got the driver out of the car and patted him down for weapons. He didn’t have any, so I instructed him to go see my partner at the hood of our patrol car. I then ordered the front passenger to slide over and exit via the driver’s door. He did. As he unfolded himself from the car, I was surprised at the size of the man. He stood close to six feet, five inches tall, probably weighed two-fifty. There was not an ounce of fat on his body and his arms were as big as my thighs. I told him to turn around and put his hands on top of the car, which he did. I began patting him down and found a gun in his waistband. I jerked my gun and put the barrel of it at the back of his neck while telling him to freeze. I yelled “four-seventeen” (man with a gun) to my partner.

I glanced over to see the apprehension on my partner’s face. She was lost, unsure of how to react. She hadn’t been exposed to such situations in her six months of training. I yelled at her: “Pull your gun out and point it at this asshole!”

She pulled her gun and pointed it toward us, the tip of the barrel bouncing in her shaking hands.

Calmly, I told the big man at the end of my barrel: “You’re too big to fight, so I’m not going to play any games. You’re going to leave your hands on the top of that car and I’m going to take that gun out of your waistband. Then I’m going to handcuff you. You see my partner?”

He glanced her direction. “Yes sir.”

“If you so much as flinch, she’s going to kill us both.”

He glanced again, sweat beading across his forehead.

I removed from his waist a six-inch Smith & Wesson .357 Magnum revolver and stuffed it in the small of my back. Then I reminded him of my partner in the event he forgot how dangerous this gunplay had become. He assured me he was still cool. I hooked him up and used him as a shield as I backed toward our patrol car. 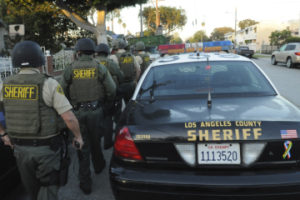 The troops had arrived by now, though I had barely noticed. Someone yelled out to me, “Got him,” and he was whisked away as I kept my focus on the two passengers who remained in the car, yet to be searched.

Now that we had plenty of assistance, we extracted the other occupants using high-risk, felony stop tactics. Both of them had guns in their waistbands as well.

The driver’s gun was subsequently located beneath the driver’s seat, right where he had reached during my initial approach. The question will always remain: was he concealing it, or attempting to retrieve it? The job is replete with shoot/don’t shoot scenarios.

All four suspect were parolees fresh out of the joint. It is a felony for a convicted felon to possess any firearm, placing them at the top of the gun arrest food chain. A large sum of cash was also recovered from the trunk, about twenty thousand as I recall. It would be the job of detectives to determine if they were committing robberies or running drugs.

When it was all said and done, my partner proclaimed me a great street cop; I didn’t bother correcting her. The truth of it was, I just seemed to get lucky when it came to making gun arrests.

Either way, it was a great arrest, and she turned out to be a good street cop, one with whom I’d gladly partner again.

14 thoughts on “Gunrunning in Gangland”