For most cops, there is a fork in the road when it’s time to leave patrol. Cops who choose not to promote tend to either go into investigations or go tactical. For the Los Angeles County Sheriff’s Department, tactical means the Special Enforcement Bureau.

At one time, I had entertained the idea of going to SEB. It is one of the coolest jobs in our department, and honestly, most hard-charging street cops envy those who are selected to work in any of the elite details therein.

But once I had settled into being a detective, the idea of it no longer appealed to me the way it once had. A mentor had sealed the deal for me when he asked, “Do you want to stand around in green pajamas waiting for the okay to “Go!” or do you want to be the guy who threw the party in the first place?”

Homicide detectives often “throw parties” that cause SWAT teams and brass to gather in large parking lots—oftentimes during the hours of darkness. To be the one who makes that happen is exhilarating.

One day my patrol training officer, Wilki, came by Firestone and stopped in at the detective bureau to visit. He had been at SEB for several years by then as a canine handler. Wilkie said, “Hey man, are you going to put in for Canine?”

I had never considered being a canine handler, but I did love dogs and I loved hunting man. Maybe this was a calling I had somehow overlooked.

“When’s the deadline to submit an application?”

If I had read the daily departmental teletypes, I would have known about this, and I would have had more time to consider it. Perhaps I wouldn’t have applied had that been the case. But without time for deliberation, I put together a packet—application, photograph, last two annual evaluations, et cetera—and rushed it to SEB headquarters by the end of the day.

The wife said, “That would be cool.” She’s always been supportive of my aspirations, plus she loves dogs. 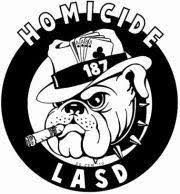 But I badly wanted to go to Homicide. Going to SEB would derail that path, I argued.

She left it up to me.

The day after I applied, I received notice that the physical fitness test would be held in four days.

I hadn’t run for about six months—since the last Memorial Run—and I was in no shape to take that test.

Passing the obstacle course is a requirement for SWAT, ESD, and Canine applicants. Once a deputy is assigned to one of those details, he/she is required to qualify on the course quarterly.

Applicants run the course wearing tactical pants and boots, and while wearing a flack vest and duty belt. It begins with a 100-yard dash.

At the end of that sprint is a six-foot block wall that you must climb over. On the other side is the course itself, spread across the SEB station grounds. You climb across 15 feet of monkey bars, drop and crawl through a 20-foot corrugated pipe that is buried in the ground, and wherein lay the collected droppings of the canines, placed there with a purpose.

After the pipe, you climb a wooden wall, drop and crawl through a cutout at the bottom of that wall, and then grab a rope and drag a 200-pound steel beam on a gurney for 20 feet.

Then you climb a 10-foot chain-link fence, run about a quarter-mile through the parking lot, across the park, and back to the starting line where you keep going right by for the second round of fun.

You finish by walking 30 feet along the top of a block wall as if it were a balance beam. The clock stops when you step down. To pass, you must have completed the course in under 8:40.

After the obstacle course, you are required to scale the side of a building using a knotted rope, and then you have to rappel from a 30-foot tower.

What Had I Gotten Myself Into?

I remember rocking back in my very comfortable DB chair, wondering what I had been thinking when I dropped off my application. But I had, and there was never a reverse gear in my drivetrain.

So I consulted my self-appointed personal trainer, Floyd, and asked what I could do to prepare myself.

“You can’t be ready in four days,” he said. “Go for a couple of easy jogs between now and then to loosen up, and for the test, light your hair on fire and give it hell. You’ll pass it, I know you.”

The Day of the Test

The first time through the course nearly killed me, but the good news was, I was halfway finished. I worked hard to control my breathing as I jogged past the start line for my second lap. A monitor announced my elapsed time, and I knew I was on track to pass as long as I didn’t weaken.

Getting over the wall requires momentum, especially when you’re fatigued. I knew to hit the wall as hard as I could with my lead foot and to propel myself over the top.

The applicants are staggered so that the testing doesn’t take all day. As I approached the wall on my second lap, I saw that the deputy who had gone ahead of me was struggling to get over on his second pass.

This guy carried fifty pounds less than I did in body weight alone, and he was built for running. I guess his upper body strength had failed him, or maybe he didn’t know to hit the wall hard. Nonetheless, there he stood, jumping up and down as if by some miracle he would all of a sudden spring over it. I continued building momentum, thinking, get the hell out of my way!

As I drew nearer, I yelled for him to move. He did, and I propelled my big ass over the wall. The fact I had passed another applicant actually motivated me more.

Second Lap Through the Obstacle Course

Many of my former colleagues at Firestone had gone to SEB and were there that day as monitors facilitating the testing. Two of them, in particular, turned into drill instructors as I pushed through the second lap. “Move, Smitty, move!” “Don’t you quit!” “Make Firestone proud!”

It was Jerry and Sal, and they yelled at me through the rest of the course. Sal ran alongside me for the duration, motivating me and keeping me on pace to finish in time. I was so tired I knew getting over the fence would be the toughest part left. I hit it hard, made it to the top, and fell to the ground on the other side.

From there, it was a short run and a walk down the wall. I had this.

At the end of the course, an Emergency Services Detail deputy came over and took my vitals. These deputies are fully trained paramedics, the ones you see rappelling from the big Sikorsky helicopters and rescuing people from deep canyons or large bodies of water.

My first thought was, why is he checking me? Had he seen something that concerned him about my well-being? It was par for the course. They were there to monitor the candidates once they finished the test. The deputy waited a minute and took my vitals again, explaining that the recovery time tells the story of one’s conditioning. He said, “You’re in good shape.”

How smart could this guy be? I knew for a fact that I was dead.

The Rest of the Process

I passed the course, completed the wall climb, and rappelled off the tower with Sal above me, threatening to do bad things if I hesitated. Heights were never my thing.

A few weeks later, I received a notice that I had been disqualified from the process due to my “driving record.” But I hadn’t had any accidents.

I called a sergeant at SEB who told me that I was disqualified because I had received days off and a written reprimand for wrecking a car during a pursuit and shooting incident.

I hadn’t wrecked a car during the incident he referenced. Another deputy had crashed his car while he raced backward to get out of the kill zone while bullets whizzed all around us. But I hadn’t so much as scratched the car I was driving. Nonetheless, the inept captain deemed our actions that night to be outside of policy. The written reprimand he issued was so unclear it appeared that all of us had crashed cars during the pursuit.

I considered protesting SEB’s decision to disqualify me but was told by a good source not to bother. The bureau had two candidates in mind before the testing had even begun, I was told, one of which was needed to fill a quota. That’s just the reality of our world.

But everything happens for a reason. I understand that now more than ever as I look back on my life. The truth is, I would have loved working among the great cops at SEB, but it just wasn’t in the stars for me.

Nonetheless, I’ll always have the fond memory that day when I earned the right to say I passed the Special Enforcement Bureau’s physical fitness test. That, my friends, was no small feat for a detective who hadn’t trained to take it.