When you arrive at the blank page in the back of this book, you won’t have come to it lightly.

BOUND BY WAR is a memoir by Todd Lander, who served in Vietnam with the 101st Airborne Division, also known as the Screaming Eagles. In Vietnam, the 101st airborne comprised battalions of airmobile infantry, artillery, rocket-firing helicopters, and an air reconnaissance unit. Similar to a great line in the movie Apocalypse Now — that the First of the Ninth was an old cavalry division that had traded in their horses for helicopters and went tear-assing around ’Nam looking for the shit — the Screaming Eagles of Vietnam deployed and fought differently than did their predecessors, who jumped from their planes into the dark skies over Normandy on June 6, 1944. But these jungle warriors fought just as hard and against an equally dangerous and committed opponent.

Drafted into the army, Lander married his sweetheart just before he was sent to Vietnam. It was the summer of ’68, the year of the Tet Offensive, the My Lai massacre in South Vietnam, the assassinations of Dr. Martin Luther King, Jr. and Presidential candidate Robert F. Kennedy, bloody clashes between police and the Black Panthers at the Democrat National Convention in Chicago. It was also the year Nixon won the White House and Apollo 8 and its three astronauts orbited the moon at a record speed of 24,200 miles per hour. But Lander had one thing on his mind: survive a year in ’Nam and return home to his lovely bride. He went in a cherry, an FNG, a boot, and emerged on the other end — barely, and by the grace of God — a different man.

Because Lander wrote the book, you know that by some miracle, he survives. But many times throughout the story you are anything but confident that he will. Sadly, many of his brothers did not survive, and it is in their memory that he wrote this book.

My Connection to Todd Lander

I knew Todd Lander when I was a boot deputy, assigned to Men’s Central Jail in Los Angeles. Todd was a two-striper then, a senior deputy. I don’t recall having ever had a conversation with him, but I remember him as someone whose easy smile belied the dark memories that haunted him. You just never know what a stranger has endured, has accomplished, has survived.

Thankfully, I’ve had a chance to really get to know this great man through his memoir, and through subsequent conversations about it.

The Memoir: Bound by War 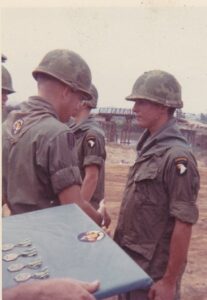 BOUND BY WAR is not about superheroes or men without flaws and fears; rather, it is the true story of young men who answered the call of their country, who endured the ugliness of war while hoping only to see their loved ones again. It’s about the bond of men who fight and sometimes die together, an exclusive club to which the membership fees are unimaginable.

When a paragraph begins, “On our fifth day without food,” you begin to understand the horrific conditions these brave fighting men endured in the name of freedom. You’ll try to imagine what it might be like to go a month without bathing or to try to sleep lying in four inches of water while fighting off leaches, and mosquitos the size of buzzards. You’ll question your own resolve — could I have, would I have… and each of us has our own ideas about that. But few of us know for sure.

This is Lander’s first book, but you’d never know it. He’s a naturally gifted writer of prose, and his words flow beautifully through the pages. He brilliantly (and seamlessly) interweaves his personal life and parts of his childhood into the story, allowing you to come to know and love him. Only a masterfully written memoir evokes such feelings from the reader.

You’ll come to know and love his brothers, and you’ll feel the pain and sorrow when some don’t make it. You’ll fret about their conditions and hope for the best, though you know it’s not going to end well for all of them, nor even for most of them.

And you’ll feel that grief because Lander puts you right in the front row, directly in the splash zone. 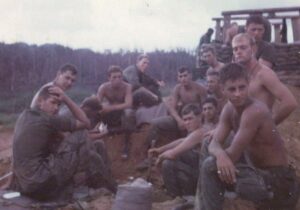 Excerpt: Not Long after Christmas, while we were in light contact with the Vietcong, I lay prone behind a tree, contemplating the recent debate at the Paris Peace Talks of whether they should have a rectangular or circular table. Like those representatives at the peace talks, we too had reached a stalemate in our current battle. Neither side was willing to risk advancing their positions. For quite some time, we had been tossing bullets back-and-forth intermittently. With time to think, I began to fantasize about a new way to fight this war.

Funniest line of the book (of course, context is everything, and I won’t ruin it for those who are going to read the book): “I’m not that kind of Indian.”

Second funniest: “Where’d you learn to drive? I’m too short for this shit!”

As you near the end of the book, you become accustomed to the hardships, the battles, the fear, agony, and horror that was the Vietnam war. Then you meet Sergeant Fernandez. It would do no justice to describe him briefly here, but you will be thunderstruck by the actions of this warrior.

I’m not going to lie, the ending is heavy. The despicable behavior of protesters at the airport is a reminder of the tremendous disservice we did to our servicemen of that era. It will strengthen your resolve to thank these veterans when you happen upon them, and that is the very least we can do. 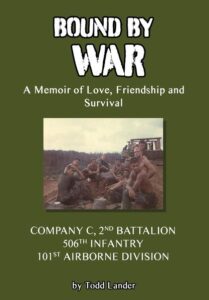 I want to personally thank Todd Lander for writing this book, for telling this horrific and wonderful story, for reliving the nightmare, for bleeding on these pages. He did it for his brothers; he is graciously sharing it with us all.

THANK A VETERAN AND ORDER YOUR COPY TODAY!

16 thoughts on “Bound by War: A Memoir by Todd Lander”