Ghettoside: A True Story of Murder in America 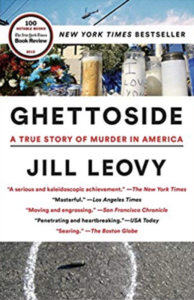 As they walked him out of the building, Devin was back to whining. He wanted something—a soda. Skaggs turned, and for an instant, the calm, imperturbable patina he had maintained for two decades of working homicides slipped. Farell caught his look, surprised; he had never known Skaggs to be anything but easygoing and in control.

In case you missed it, click here for PART I.

DS: I was surprised when I read the part in your book where Metro was brought in to try to stop the back and forth murders, and that they went to that parking lot and arrested winos.

JL: Some police officers might be loath to admit it, but there is a problem of excessive penalties, excessive charging, excessive discretion by prosecutors—and usually on the low, cheap end, and often on the quota ends. I used to love the federal task forces and their big news conferences with a lot of guns spread out on the table. Usually, it was all a lot of low-level charges, a lot of nothing, arrests of guys that the cops all knew about and it’s phony.

What I think the general public doesn’t see is that there are a lot of inappropriately light sentences—especially in the seventies and eighties—and also, just impunity, how many crimes do not get adjudicated in any way, particularly assaults, rapes, homicides.

DS: Most people don’t realize how many times a person is generally arrested before they are ever convicted of a felony crime.

JL: It’s so pernicious because it ends up being a system that’s compensating for its prior weaknesses. Like back in the day when they were giving people seven years for parole violations. It might have been a minor violation, but they know that guy’s a shooter, but they can never charge the shooting case. So for the people on the receiving end, it’s easy for them to see that as a corrupt and unfair system, and for the people who are doing it, it’s easy to see it as emergency measures because people are getting hurt, and people are dying, and you want to be able to do something. Neither one of those is wrong, but it’s too bad that it’s so poorly understood. It’s why I talk about proxy justice in the book.

DS: Did you find it an easy transition from being a reporter to writing a nonfiction book, or was it difficult?

JL: I wouldn’t say it was difficult, just that it was a great big huge project. But my training as a journalist was hugely helpful. I couldn’t have done it without that. Certain things about journalism, in my opinion, are superior to what you see, in that you never make up a name, you never change any facts, you tell the truth. Social scientists will anonymize their reporting, making up names or changing facts to hide people’s identities. I would never do that. To sit down with John Skaggs and Wally Tennelle at the end of my reporting and ask them, “What do you say about my take on things?” that’s a really interesting conversation, and a lot comes out. Those kinds of things are super powerful, and so I am glad I’ve had a lot of training in it.

Some people are dismissive of this today, even some journalists. But when I teach journalism, I tell my students that objectivity is not something that you achieve, it’s a discipline that you try to adhere to, and it’s a difficult discipline. You have to make sure you’re getting every side, to make sure you’re really listening with your whole mind to everybody, and to immerse yourself in their point of view before you draw any conclusions. And to remember that your opinions are cheap, and they aren’t worth anything. Only the facts in your notebook are worth anything. All of those things helped me write Ghettoside, and I think they are really important principles.

DS: I would say the same is true for investigators.

DS: It’s very clear throughout the book that you thought very highly of Detective Skaggs, and I would think anyone who reads the book will feel the same way.

JL: I do admire him. I really needed a compelling protagonist because it’s so hard to get people to read about this subject. Skaggs really represents the principle of vigor in criminal justice responses to violence. Since his retirement, he has been teaching and speaking and spreading his knowledge, and I think that’s absolutely great. I think it would be great for all detectives to learn a little bit about his perspective on what works.

It is really corrosive for police officers to think their work is meaningless. I think it is a hazard of the job that dogs people. What made Skaggs so successful is that he had a really clear idea of what he was doing and why he was doing it. And I think that detectives, in particular, think, “Well, we do this for the families.” But the truth is, the families may or may not be comforted by the prosecutions, right? It’s a dicey thing, and it’s not enough. There are a lot of messages in the public sphere that this is not enough, that it’s after the fact, that clearance doesn’t matter. But I think that police officers kind of need to be schooled in the idea that building law, controlled by constitutional processes, is a life-and-death thing, that it’s incredibly important, it is for the good of humanity, and that they, the police, have an indispensable role in building law and making this part of our institutional system work, and work well for the people who have been injured, in some way, by crime. And that it’s actually a really meaningful thing to do with your life, and it’s not futile, and it’s not dark, it’s actually a great mission.

DS: That is really wonderful. Thank you for that.

JL: I can say this because I have known a lot of cops over a lot of years who were tormented at times trying to figure out why they were doing what they were doing. It can be very hard, very frustrating, and you’re part of the big machine, which is sometimes necessarily remorseless, because there’s a lot of ugliness and frankly, wrong, done in the name of criminal justice. It’s easy to get cynical, it’s easy to get burnout, it’s easy to feel soured by the pain around you. I think if police officers know why they’re doing what they’re doing and they believe in it, they’re just so much healthier, and they could be so much happier in their jobs.

DS: What’s next for you?

JL: I have a theoretical book about violence, and it builds on some of the material from Ghettoside but it’s not specifically about the police. It’s more of a history book. In Ghettoside, I touch on the fact that the patterns of violence in South L.A. look a lot like these other situations, especially like counterinsurgency in certain historical contexts, and in this book, I take that comparison further. Meanwhile, I’m working as a freelance journalist, doing things like book reviews for the Washington Post, and other projects like that.

DS: It’s been a real pleasure speaking with you, and I truly enjoyed your book. I hope this interview will compel others to read it, especially those in law enforcement.

JL: That would be great. It has been avoided by some of the brass in some departments, and I’ve been told that it is because of the title, which is so politically incorrect. I hadn’t considered that when selecting the title because it was a phrase used by black gang members in Watts. But because of that, it’s been difficult getting the leaderships to endorse it. It’s really depended on reaching people from the ground up, word-of-mouth. I do hope it reaches more of them (cops) though because it is clearly intended for police officers.

While I was thanking Ms. Leovy again for allowing me this interview, we spun into a short conversation about some of the other reasons the brass may not be so fond of her book. I suggested that the LAPD might be ashamed that their homicide detectives were purchasing their own supplies and working without overtime. She left me with this powerful quote:

“The leadership reflects a political environment where the public does not value the function of solving crimes.”

And that, my friends, is what Ghettoside is all about. I strongly urge you to get this powerful, provocative book today!

Ghettoside: A True Story of Murder in America