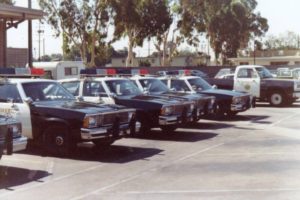 The unincorporated county area of Watts is policed by the Los Angeles County Sheriff’s Department.

From 1955 to 1994, deputies assigned to the area worked out of the legendary Firestone Station. I had the privilege to be trained there in 1986, and I remained until the doors closed in 1994.

The eighties saw the height of the crack cocaine epidemic, and PCP was inexplicably the other narcotic of choice in South Los Angeles.

In my early years on the department, I was single, and as such I would volunteer to work the holidays so those with families could have the time off. At Firestone we would often work on skeleton crews for the holidays, meaning there were fewer cars fielded, and most would be one-man cars (which was not the norm for that district).

Leading up to Thanksgiving, circa 1989, my very good friend and academy classmate, Johnny B., came up with the idea of a potluck for those of us who would be working the p.m. shift. He suggested we wear long-sleeve Class-A uniforms and ties for the occasion, dress usually reserved for interviews, ceremonies, and funerals. We would come in from the field and partake in the festivities, if all went well.

Johnny was working inside that day, assigned as the Firestone p.m. watch deputy.

I grumbled at the idea. Most of my long-sleeve Class-A uniforms were well-worn, and I only maintained one for special occasions that didn’t show the wear and tear of a ghetto cop’s standard attire. I didn’t want to wear it on patrol, but I did want to be a team player.

Briefing ended at 1400 hours. As I headed out to my patrol car with my equipment bag and a shotgun in hand, Johnny said, “Alright, see you in a bit for dinner. Be safe out there.”

Minutes later I was assigned the handle on a family disturbance call in the 1500 block of East 87th Street. This location is south of Firestone Boulevard, and east of Compton Avenue. I had just pulled out of the station parking lot which is only a few blocks away.

Further detail on the call came in: the disturbing party, an uninvited, unwanted male family member, was under the influence of PCP (Phencyclidine), and was tearing up the home.

We referred to people high on PCP as “dusters.”

PCP, an animal tranquilizer, has an effect on humans that is anything but tranquil. In fact, its use often results in schizophrenic behaviors and superhuman strength. That coupled with the attendant immunity to pain, it makes the users of said drug a challenge for law enforcement; there were never easy answers.

I told my assisting units we would meet at Compton and 87th Street and roll in together. When I arrived, I saw a CHP (California Highway Patrol) vehicle abandoned in the middle of the street with both doors open.

The California Highway Patrol enforced traffic in unincorporated districts of Los Angeles County. Firestone “chippies” were a breed among themselves, in that they too were addicted to the action and fast pace of working in a high crime neighborhood. As such, they would monitor our radio frequencies, and it wasn’t uncommon to have them show up at our hot calls.

I announced on the radio, “Chippies are 97 (at the scene), I’m rolling in. All responding units roll directly to the location.”

There was yelling and screaming as I approached the open front door. I ran in to find two CHP officers fighting with a man, flailing about through the kitchen and dining room, knocking over furniture. Four women stood screaming and yelling for the officers to stop what they were doing. I announced my presence and jumped in to help. As I did, the women watching joined in to help the suspect. They were pulling on our uniforms and grabbing at our arms and legs. We fended them off and continued fighting to control and handcuff the suspect. Additional deputies arrived and ran in to assist us. By then, the women were punching and kicking us as we fought with the suspect. The assisting deputies tried to restrain the women, which resulted in separate fights breaking out inside the home.

When the dust settled there were four women and a “duster” under arrest. The house was in shambles with overturned and broken furniture throughout.

One of my assisting units transported the suspect, who had to be restrained with handcuffs and leg hobbles. I crammed all four women into the back seat of my car, and to say they were angry, is an understatement. For the short ride to the station, they yelled and cursed and said horrible things about my mother, all of people. I yelled, “Happy Thanksgiving,” with some expletives, pissed at them and none too happy with my buddy, Johnny B.

When we arrived at the station, several deputies and a sergeant met us in the parking lot to see the end result of what had become quite the Thanksgiving Day event. As I unloaded the women from the back seat of my car, Johnny stood with his trademark grin. My uniform was torn and tattered and bloodstained. My tie was nowhere to be found. I marched the women past him and grumbled, “Happy Thanksgiving, pal.”

Later we laughed about the incident while enjoying a nice meal in the briefing room. Being a bachelor at the time, my only contribution had been a couple of cans of vegetables. Normally, I might have felt sheepish about digging into the main course with so little invested, but I felt I had paid my dues that day, and dug in unapologetically. It turned out to be a pretty good Thanksgiving after all.