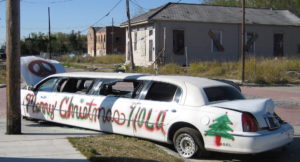 For cops, a holiday shift can run the gamut from excitement to danger to boredom to emotional drain.

When I was a patrol deputy, I generally worked all of the holidays. Being single at the time, I would volunteer so that those with families could have the time off. Like many cops, I loved my job and usually looked forward to each shift. The station was home, its occupants my family. At times, I couldn’t believe they paid us to do the job.

Other times, it was clear they didn’t pay us enough.

As is generally the case with police work, the holidays are often unpredictable. I recently blogged about a Thanksgiving Day donnybrook involving a duster (PCP suspect), his family, a couple chippies (CHP officers), and a few sharply dressed Firestone deputies. We had donned our finest uniforms and planned a potluck that day in our best effort to be festive. Thirty minutes after the shift briefing, my uniform was torn and tattered and I had a duster and four of his family members in custody.

Robberies and burglaries picked up around Christmas, and reports of domestic violence increased as well. Drug use remained steady and alcohol flowed freely, fueling the violence among friends and strangers alike. There would be siblings who stabbed one another, parents who beat their children, and neighbors who fought with fists and sticks and sometimes guns. Gangsters weren’t opposed to committing a Christmas drive-by, just to keep it real in the hood.

Suicide cases were expected, and you could always count on at least one homicide scene with a Christmas tree or an inflatable Santa Claus in the background. There is nothing like yellow police tape to accent the holiday décor.

A Rare Holiday in Firestone

But even Firestone Station had the occasional quiet and peaceful holiday, and I fondly recall one such Christmas Eve. I happened to be partnered with a station favorite, Henry Romero.

The cold, damp evening air drifted through our open windows as we slowly patrolled the Walnut Park district where street vendors offered tacos, tamales, and grilled corn on the cob. Others peddled flowers for the girlfriends and knockoff jewelry for the wives. There were gifts for the kids: pinatas, puppets and dolls, el baleros, and noisemakers for all occasions. Many of these toys were handcrafted of wood or leather and imported (smuggled) from Mexico; others were made in China because even nostalgia isn’t sacred. Everyone was in a festive mood.

And since the violence and mayhem hadn’t materialized, Henry said he had a few stops he’d like to make.

A “few stops” consumed at least half the shift as we visited families throughout the area. I wondered if they were part of his family, extended or otherwise. All were warm and friendly, inviting us in and insisting we partake of their holiday meals. There were hugs and kisses, handshakes and sincere well-wishes, and promises to stay in touch. Some filled our hands with gifts, trays of food, and beverages we would save for later. By the end of our shift, our bellies and hearts were equally full.

As it turns out, the wonderful people we visited with that night weren’t family, only friends. People Henry had met and developed relationships with over the many years he worked those streets. I was still pretty wet behind the ears at the time, and it made an impression, one that stayed with me for the remainder of my career. Henry was doing community-oriented policing before it was cool—or should I say, mandated.

Lessons from a Veteran

It would be years before the light bulb came on and I realized how Henry—and the many others who worked in similar fashion—seemed to know everything that happened on the streets. He and his partners—Jerry Plent comes to mind—routinely took bad guys to jail, and it wasn’t uncommon to see these crooks smiling and chatting while being booked on felony charges. It occurred to me that this was the secret of veteran cops: respect and rapport. Having fun in what many of us would argue was truly the happiest place on earth.

Been There, Done That

If you can close your eyes and feel the damp air of a cool night on patrol, maybe hear the sounds of the street or even smell the inside of a radio car, then you’ve been there and done that, and are likely nodding and smiling as this story has no doubt evoked memories of your own.

A Message for the Others

For those who haven’t been there, know that the great majority of cops are kind and caring souls, driven to the profession with the desire to help others, to protect the weak from bullies and predators, and to stand up for those who are unable. They sacrifice holidays and sometimes much, much more, to make a difference in our communities.

Because all lives matter.

22 thoughts on “Christmas in the Hood”