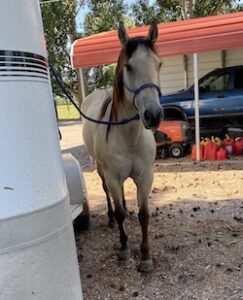 Lil stood tied to my trailer, shaded from the late afternoon July sun by a stand of pine trees along my west property line. I sat a few feet away, sipping an ice-cold beer but not enjoying it, fighting back the tears that I’d soon not be able to contain.

They had already streaked my face at various times throughout the day: her (last) morning feeding of grain laced with Gabapentin and Phenylbutazone (Bute), her (last) pasture turnout an hour later, preceded by the daily routine of picking debris from her specialty “corrective” shoes, bringing her in from the pasture for the (last) afternoon, and watching my wife groom her mane and tail, before…

It was Almost Time to Say Goodbye 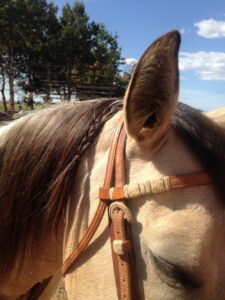 I only had a short time left with my sweet Lilly Pie, a buckskin beauty registered as Rona Flip Fritz with the AQHA (American Quarter Horse Association).

In the stillness of the hot afternoon, I reflected on the journey that had begun on an equally hot day in the summer of 2012. I needed a second horse and learned about Lil through a cowboy friend of mine. My daughter, Randi Jo—fifteen at the time—and I went to see this beautiful buckskin mare that was said to be good on the heel side in team roping.

A couple of years prior, Randi Jo and I had gone from Idaho to California to look at a horse, and we brought home three. So our track record at horse sales was or wasn’t a good one, depending on how you saw it. But nobody would have bet against us bringing her home.

When we pulled up and saw the buckskin standing tied, groomed and ready to ride, Randi Jo said, “She’s beautiful.” I knew then that we’d be driving away with her as long as she didn’t buck me off during the test ride.

Doug Cook and his two wonderful boys, Kirby and Kelsey, prepared the roping cattle and, after I warmed up the stunningly beautiful mare, the boys roped and turned about a dozen steers for me to heel.

She was a seasoned rope horse and she didn’t buck—as Doug assured me she wouldn’t—so we sat on the deck and had a cold beer while haggling over a few dollars. We shook hands and Randi Jo and I drove home with Lil in the trailer; clear evidence that the two of us shouldn’t be allowed to look at horses for sale without adult supervision.

Over the next eight years, Lilly Pie and I competed in team roping events from Kalispell, Montana, to Winnemucca, Nevada, and from Vale, Oregon, to Rexburg, Idaho. We competed at rodeos from Council, Idaho, to Riverside, California, and we rode up and down the mountains, through the streams, and across the deserts of Idaho and Oregon.

We covered many miles and made memories that I will always have.

About that Bucking Thing

I was at a jackpot, and the first steer we came out on ran like a scalded dog. I kicked Lil into high gear, and we were off to the races. But my header couldn’t catch that little black screamer before he made it to the stripping chute at the other end of the arena. Lil, now highly excited, pranced and snorted as we made our way back.

A short time later, it was our turn again, and Lil felt like a bundle of explosives beneath me as she anticipated the next run. My header nodded and the chute popped open, and the steer stepped out—rather than ran out—and stopped.

He was the complete opposite of the steer we’d drawn before. But Lil had jumped out of the box in anticipation of another scorching run, and I had to get ahold of her before she ran past the steer. I pulled back on the reigns and she came to an abrupt halt. Then the steer took off and I gave Lil her head. She ran about three strides, then decided she’d had enough of my shenanigans, and she started to buck.

A month or so later, I ran into Doug at the ACTRA (American Cowboy Team Roping Association) regional finals in Winnemucca, Nevada. I said, “Hey Doug, I thought you said this horse didn’t buck.” He said, “Well, she doesn’t buck very hard.”

That was true enough, because if she had bucked hard, I would’ve come off her—I’m no bucking horse rider.

Still, I protested, “Did I ask you if she bucked hard, or if she bucked?” He laughed a little and I went on to tell him how good she had been for me and how much I liked her.

One day my good friend, Riley, and I were roping in his arena, just him and me and two nice horses, a pen of decent cattle, and a cooler full of beer.

At the time, I was suffering a bout with positional vertigo, something that would come and go unexpectedly, and with some regularity. We had roped a steer and were slowly making our way to the stripping chute where Riley would be removing his rope from its horns.

The heeler’s rope comes loose once you let the steer up, so my rope was dragging behind us and I was coiling it up as we meandered to the end of the arena.

I looked back over my shoulder to check my rope, and my vertigo struck me. Everything suddenly spun wildly, and I fell off my horse like a drunken fat man, though I had only had one beer by then.

I hit the ground like a sack of you-know-what, and when I looked up from the ground, Riley was laughing and Lil was looking down at me, her pretty face a mask of confusion.

From the time I bought Lil she suffered from a degeneration of the navicular bone in both of her front feet, an unfortunate syndrome which causes varying degrees of lameness.

There are several ways to treat navicular disease: medication, corrective shoeing, and surgery among them. Over the course of the next eight years, we did it all. We even took her to Clark Equine in Eastern Idaho, where one of the best leg veterinarians in the northwest resides.

Surgery provided relief for a year or two, but soon she was lame again.

Then We were Done

I eventually had to quit riding her. For the last several years of her life, we pampered her and kept her medicated in an effort to make her as comfortable as possible; her performance days were behind her. We kept her in corrective shoes and continued her medication until neither offered any relief.

The last six months of her life, Lil was in constant pain, in spite of the fourteen pills and four scoops of Bute she received daily. It was time to do the humane thing and relieve her of the pain and suffering. She was twenty-one years old.

The Cycle of Life

We had bred Lil, hoping she would produce a nice colt who could someday take her place.

In the spring of 2016, she gave me a dandy one indeed. In fact, that’s what I named the adorable little filly: Flippin Dandi Fritz. I call her Baby Doll.

She is sweet like her mama and she will remain with my family for all of her life, reminding us all of the wonderful mare, our Lilly Pie.