A former colleague recently asked for audiobook recommendations for himself and others who spend a lot of time traveling. I’m a big fan of audiobooks, and I’m always listening to something on audio when I’m driving or taking a walk.

The following are some of the books I’ve listened to recently that you might enjoy as well: 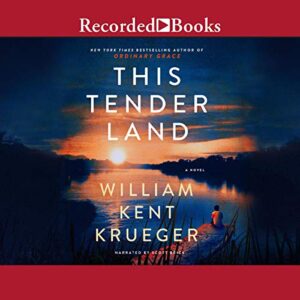 This is an outstanding audiobook, a superbly written tale that will remind you of a Mark Twain story.

Scott Brick is one of the best in the business of narrating audiobooks. I’ve had the pleasure to meet him, and he is a real gentleman as well.

The prose is beautifully crafted, replete with rich characters, perfect pacing, and a terrific plot. 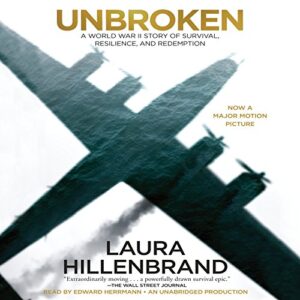 This is the breathtaking true story of Louis Zamperini, a juvenile delinquent and budding criminal turned U.S. Olympian, who entered the fray of WWII as a bombardier flying B-24s.

His aircraft crashed in the Pacific during a search and rescue mission, killing all but him and two other airmen, all of whom drifted at sea on one raft with no rations for forty-seven days.

The trio narrowly survived shark attacks, starvation, dehydration, exposure, and dissent, only to be captured by Japanese forces and held as prisoners of war for more than two years until the war ended.

The brutal, despicable treatment of Japan-interned prisoners of war is chronicled here—thank God, since history is being erased faster than it can be told—in astounding detail. This story is almost unbelievable, but every word is true. It is beautiful, horrifying, riveting, and one that is suited for a long trip because you will not want to stop listening to it. From the best-selling author of SEABISCUIT, this is an important part of history that everyone should hear. 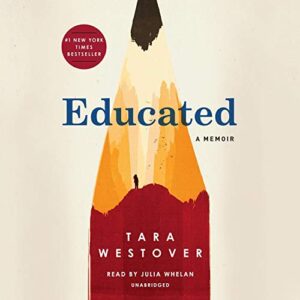 This book was beautifully narrated by Julia Whelan. It is the true story of a young woman raised in the mountains of Idaho by a survivalist Mormon father and his obedient wife, as well as an abusive brother.

This audiobook might contribute to the destruction of our planet, as you will find yourself idling at any given destination far longer than you should, just to finish one more chapter or scene.

Fascinating, horrifying, and almost unbelievable that some children are still raised in this fashion, this book has been on all the bestseller lists and comes highly recommended.

HOMICIDE: A YEAR ON THE KILLING STREETS by David Simon 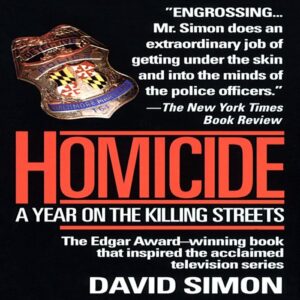 When I read this book many years ago during the early days of my career, my yearning to work at the elite L.A. Sheriff’s Homicide Bureau was strengthened. Now retired, I recently listened to the audiobook and enjoyed it just as much.

Simon spent a year embedded with Baltimore’s homicide unit, learning the true personalities of its detectives, closely observing the processes, seeing the challenges of such work, and feeling the anguish and frustration that is often felt by those who are called to investigate murders.

The nineties TV series HOMICIDE: LIFE ON THE STREETS was inspired by this book, and the author is also known for his production of HBO’s THE WIRE and THE CORNER. If you don’t get enough of a feel for what being a homicide cop means through my Dickie Floyd Detective series, try this book; you won’t be able to stop listening.

HELTER SKELTER: THE TRUE STORY OF THE MANSON MURDERS by Vincent Bugliosi. 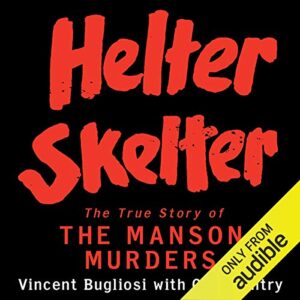 This is yet another of my favorite books narrated by Scott Brick.

We all know of the infamous Tate-LaBianca murders, but this is the story told by the man who prosecuted “the Family.” From the early days of Manson and his flowered and free-loving hippy following, to the murders, the investigation, the prosecution, and the aftermath, this book tells it all.

It is yet another book that I’ve read but also enjoyed listening to the audiobook. 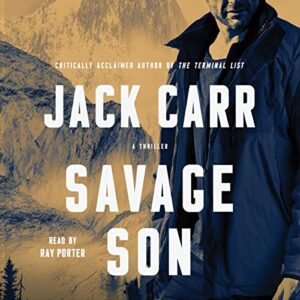 THE TERMINAL LIST, SAVAGE SON, and TRUE BELIEVER. Jack is a former Navy SEAL commander, the real deal who served our country for twenty years in some of the most treacherous theatres.

I also had the distinct pleasure of meeting him last year at the Men of Mystery gathering in Long Beach. (Have I mentioned this is an event that any mystery fans can attend?)

Each of Carr’s books is fabulous. As I write this blog, two of the three are on the NY Times best-seller list. Truthfully, it’s almost not fair that a guy as badass as Jack Carr is also a topnotch—and I mean TOPNOTCH—author. The man is also very humble and personable.

Anything by Elmore Leonard 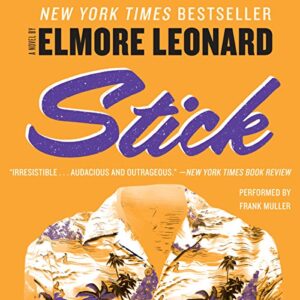 He’s always been one of my favorite authors, so this is a given.

I’ve read everything he’s ever written, and now I’m enjoying each of them again as an audiobook.

STICK, SWAG, FREAKY DEAKY, OUT OF SIGHT, UP IN HONEY’S ROOM, and RAYLAN, featuring the character U.S. Marshal Raylan Givens, upon whom the epic TV series JUSTIFIED is based.

Elmore Leonard was unquestionably the “King of Dialogue,” whose work undeniably influenced my writing. You can’t go wrong with any of his audiobooks, though my favorites are those which were narrated by Frank Muller—he really has the voice for a great Leonard tale. 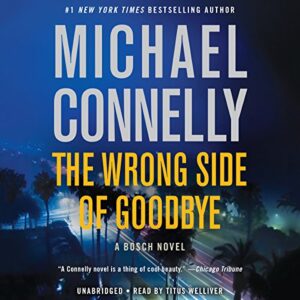 Most people know I’m a fan of Connelly, as are many of my readers. I have always been a big fan of his work, and I love the audiobooks that are narrated by Titus Welliver, since it is his voice that is famously attributed to Bosch.

I am, however, compelled to be totally honest with my readers about my waning adoration of the Bosch series.

I have become weary of his many jabs at the Los Angeles County Sheriff’s Department, which are sprinkled throughout many of his books. The serial rapist in THE WRONG SIDE OF GOODBYE is portrayed as a former deputy sheriff who was part of a group of homophobic, racist deputies. There was another book where Bosch went to the county jail and encountered a white, tattooed deputy, said to be a member of a racist gang of deputies. With all else going on in our country right now, I have a very difficult time not calling him out for doing this.

LAPD has given him carte blanche access to their department records, resources, and information, all so he can write his stories. There are numerous LAPD detectives who are his technical advisors, and who are on very friendly terms with him. But what does the former L.A. Times reporter really think of cops? If his books were written about some other department, how might he portray his beloved LAPD cops in those novels? One can only imagine.

That is worth considering for all of my law enforcement family, friends, and readers. I’ve had other deputies tell me they’ve stopped reading his books because of this, which is a shame because his writing is otherwise beautiful. 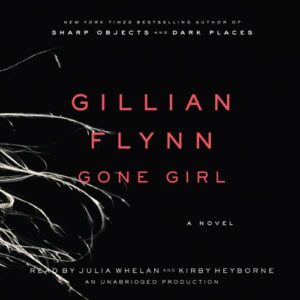 This thriller is an absolute trip.

Dark and twisted, this is an audiobook that draws you in and holds you.

It is beautifully written and wonderfully narrated, very entertaining. 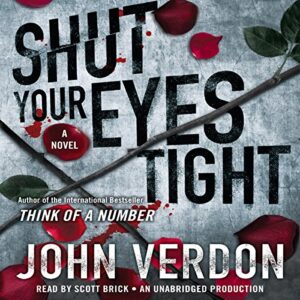 SHUT YOUR EYES TIGHT and THINK OF A NUMBER by John Verdon, are great stories and worth the listen.

The former is narrated by Scott Brick (so you know it’s good), and the latter by George Newbern. 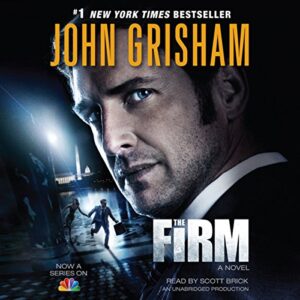 THE FIRM by Gresham, of course.

What else needs to be said of this classic, other than that it also makes a great audiobook choice. 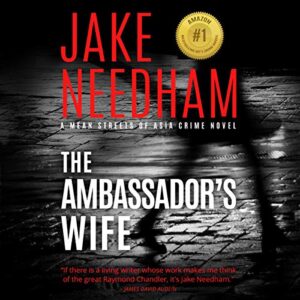 Any of the Jake Needham MEAN STREETS series are worth your time.

Two of my favorites: THE AMBASSADOR’S WIFE and KILLING PLATO.

In Case You Haven’t Heard 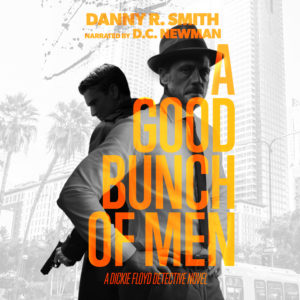 And lastly, each of my first two novels in my Dickie Floyd Detective series is available as an audiobook as well:

A GOOD BUNCH OF MEN and DOOR TO A DARK ROOM.