Texans Mourn the Loss of an Officer 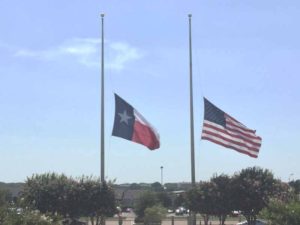 An internal email obtained by multiple media sources reports that Heidelberg, his probationary police officer, plus two additional officers responded to a burglar alarm at a Midland home on Tuesday morning.

The email says the officer made a loud announcement of their being there at the front door, but the homeowner believed that his house was being broken into.

The homeowner then shot toward the flashlight being held by the officer, hitting him above his bullet-proof vest.

Despite MPD personnel trying to treat and transport the officer to the emergency room, he died from his injuries.

The Texas Rangers will be investigating the shooting.

The City of Midland is expected to release more information throughout the day.

Any responsible gun owner knows not to shoot at unknown targets. It will be interesting to know the rest of the story on this case as the investigation unfolds. When I first posted this, the information I had was that the homeowner had shot through a closed door. Now it seems the door may have been open. I reserve any further judgment until I know the facts.

Also, I am in no way criticizing the Midland officers or their tactics in this tragic case. I don’t know enough about what happened, and even if I did, this isn’t the time or place to critique that incident.

After retiring from the Los Angeles County Sheriff’s Department, I moved to a small town in Idaho where the crime rate is low, and people feel safe in their homes. But having stood at hundreds of violent crime scenes throughout my career and having viewed photographs of hundreds more—including those of the Night Stalker cases—it took me a long time to sleep with the windows open on summer nights the way people who aren’t burdened with my knowledge might. To this day, I am quick to arm myself at the slightest sign of trouble.

The incident in Midland reminds me of a night when something happened to me that could have ended as tragically. Fortunately, it did not, and it is my hope that this story might serve as a reminder to the cops still working the beat, as well as to any homeowner who might experience something similar.

It was about three a.m. when I was suddenly awakened by the sounds of footsteps on our rear deck. I lifted my head to look out the back window, and I listened carefully. I saw that my wife was wide awake as well, and alert. “What was that?” I asked.

“Someone just walked across our deck!” she said.

I rolled out of bed and armed myself with my .40 caliber Glock that is equipped with a tactical flashlight. As I did, my wife said, “There are two men in our back yard.”

I turned from my nightstand where I had retrieved my gun to look out the window. I didn’t see anyone. I whispered, “You saw them?”

“Yes, they just walked past our window.” She indicated the direction they traveled, which was west.

Our back yard is on the north side of our home. The wooden deck runs the length of most of that side of the house and leads to a door that accesses the master bedroom. At that point, the deck ends. To walk past our window, the mysterious guests would have stepped off of the deck and walked across the lawn.

I quietly exited the front door, intent on catching the unwanted guests as they came around the west side to the front of the house. I did. Or, shall I say, they caught me.

A beam of light flashed into my eyes as I stepped out of the house, gun in hand and dressed only in the shorts that I sleep in. Though still somewhat foggy from the rude awakening, my first instinct was that they were cops. I couldn’t see them—I couldn’t see anything!—but I have never heard of a burglar using a high-powered flashlight, nor could I imagine that one would be pointing it at me if he did. This had to be the cops, I knew instinctively.

I also realized I was now in a uniquely vulnerable situation, knowing firsthand what it is like to be in the situation these cops found themselves in at that exact moment. They would be trying to quickly resolve the dreaded “shoot/don’t shoot” conundrum.

I immediately called out, “Homeowner,” and repeated it. One of the two men just as quickly announced that they were the police. I then stated very clearly that I was armed—in the event that they hadn’t yet seen my pistol—and that I was going to set my gun on the ground. After doing so, I stood up and kept my hands held upward, palms facing them.

One of the cops asked if my address was a particular set of numbers. No, it wasn’t, and I shook my head while trying to think of whose it could be. He then added, “We got a call of an alarm going off.”

My wife had apparently followed me to the door, and she called out from behind me, “That’s Mal and Dana’s house.” (Our neighbors.) She knew—and after she said it, I remembered—that they have an alarm. Not many people in our community have alarms.

We live on a gravel road with only four houses spread out on 10-acre properties. The numbers posted on our fence are admittedly not easily seen, especially at night. However, as a cop, it is imperative that you get it right!

There were three cars in the driveway. If I weren’t sure of an address, my first instinct would be to run one of the license plates to get the owner’s name and address. Especially when in a community where people don’t expect nor embrace uninvited guests at three in the morning, and whose residents are mostly all armed.

The way I was trained to handle an alarm response was to stealthily check the perimeter for points of entry, and, if when possible, look inside to see if a violent crime is occurring. Absent evidence of either, it would then be prudent to either knock on the door, or, if dispatch has a phone number (which is often the case for properties with alarms), make a call and ask the homeowner to come outside to meet the cops.

But when making that perimeter check, one mustn’t plod across the deck and awaken and startle the homeowner, nor should one walk upright past windows as if out for a stroll. That’s how you get shot! It is better to creep through the darkness better than the best burglar might so that if one is encountered, you can capture him, and not catch hot lead from a frightened homeowner.

In my situation, the homeowner next door had accidentally set off his own alarm; the neighborhood is still relatively peaceful.

I later learned that the two officers who responded to my home that night had later talked about the incident in front of an officer who happened to be a friend of mine. He told the pair, “You guys are lucky that it was someone with his experience and ability to think during stressful events.”

I think he was right, and that is the point.

In closing, I want to pass on my sincerest condolences to all of Officer Heidelberg’s family, friends, and colleagues. May he rest in peace.