A robust Hispanic man stood unapologetically shirtless beneath the morning sun in East Los Angeles. My partner and I suffered in dress shirts and ties while we questioned him about a Mustang, a set of wheels, and a relative of his who we believed to be a suspect in our murder investigation.

It was August 1998. Rod Kusch and I were partners at Homicide, and we were investigating a murder.

A camera crew from A&E television had been riding along with gang detectives in East Los Angeles when a shooting occurred. They were filming for the reality TV show, L.A. Detectives.

The location of the murder was a gang-infested area referred to as the Mexican Alps. Television crew in tow, the gang detectives responded. 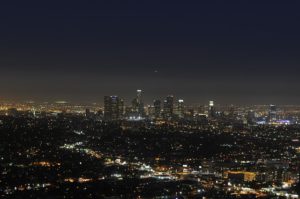 Once considered an exclusive suburb, the Alps sit high upon a mountaintop east of downtown. On a clear night, you can see the lights stretched to the coastline until they or you are swallowed by blackness.

That night darkness had come for Magdaleno (last name withheld) as he and his brother, Gilbert, found themselves on the receiving end of a drive-by shooting. A notorious and hardcore gang member, Gilbert was likely the intended target; Magdaleno was not involved with gangs.

A Case of Homicide

The L.A. Sheriff’s Homicide Bureau investigates all murders throughout the county, handling hundreds of cases each year. That night, Kusch and I were the next team up in the rotation, so we received the call out.

Once there, the deputies briefed us regarding their actions and observations preceding our arrival, while each of us tried to appear as if cameras weren’t following our every move.

The victim’s brother, Gilbert, had told the deputies that he and his brother were standing together when the suspects drove past and began shooting. They each ducked behind a parked car for cover.

After the shooting, the suspects fled. It was then Gilbert saw his brother had been shot.

The vehicle they used for cover bore numerous bullet strikes. Some revealed trajectories and patterns consistent with someone having fired from a passing vehicle.

However, other bullet strikes revealed a line of fire initiated from the passenger’s side of the parked car.

Someone had returned fire at the suspects.

A Murder with a Twist

Magdaleno may have been hit by “friendly fire.” Given the bullet strikes to the parked car, it was apparent that gunfire had come from behind his position. Given this revelation, we were anxious to attend his postmortem examination. The autopsy is an integral piece of any homicide investigation.

We interviewed Gilbert, who initially denied being armed and returning fire. Eventually, he admitted to both and provided us with the gun he used that night.

Gilbert seemed oblivious to the possibility that it was he who killed his brother.

The postmortem examination confirmed the victim had been shot in the back. The bullet that killed him was the same caliber as bullets that struck the passenger’s side of the parked car.

At this point, we were relatively certain Gilbert had killed his brother.

The next step would be to match the bullet that killed Magdaleno to Gilbert’s gun.

Firearms experts concluded they were one and the same.

The laws in California were such that when a person was killed during the commission of a felony, the person(s) who committed the felony could be charged with murder, even if they had not directly killed the victim. This was referred to as the felony murder rule.

An example of the law’s application is that when two people robbed a bank, if, during their escape, the police had shot and killed one of them, the surviving suspect could have been charged with the murder of his crime partner. This law boggled the minds of some, but it actually was a quite sensible law.

How the Felony Murder Rule was Applied

In this case, Gilbert acted in self-defense when he returned fire at those who were trying to kill him. It mattered not that he was a gang member, nor that he had unlawfully possessed a firearm. Legally speaking, all that mattered is that Gilbert did not initiate the felony crime that led to his brother’s death. Though it was he who killed Magdaleno, we would charge the occupants of the suspect vehicle with Magdaleno’s murder, once identified.

When we told Gilbert that a bullet fired from his gun killed Magdaleno, he was devastated. He had no idea that had been the case.

We explained how the felony murder rule would allow us to hold the others responsible for Magdaleno’s death even though it had been Gilbert’s bullet that killed him. Though it was little consolation for the grieving gangster, it was something to help him reconcile this tragedy.

Gilbert wanted to make amends for killing his brother. He chose to cooperate and provide more information about the men who had tried to kill him. This led us to the shirtless man with the Mustang, and then his relative who turned out to be our primary suspect.

How it Really Happened

Once cooperating, Gilbert told us what really happened. They were out front as he had described. When the shooting started, only his brother ran for cover. Gilbert, an experienced gunfighter, had stood his ground and returned fire. As the suspect vehicle continued traveling, so did Gilbert’s line of fire, and apparently, Magdaleno was caught in the middle.

The Truth Can Be Addicting

Over the days and weeks of investigating this murder, Kusch and I spent many hours with Gilbert. We would pick him up from his home and drive to East L.A. Station, or to the homicide bureau, or to other relevant locations.

Now that Gilbert had come clean about the shooting, there was a rapport between us. Suddenly we were like old friends, bonded by a dark secret about his brother’s death.

Gilbert had a good sense of humor. He would joke with us and we with him. He became so comfortable he would casually mention past criminal activity as if unaware he was talking to two cops. On one occasion, while driving through a rival gang’s neighborhood, Gilbert leaned up from the back seat and said with a grin, “We used to drive through here shooting people all the time.”

I glanced back to see his eyes full of joy with the memory. It was no big deal to Gilbert, just life in the barrio.

Months later, while previewing A&E’s documentary, Rod and I chuckled over the footage that showed our interview with the bare-chested hombre valiente. We were none too slim ourselves, but not as robust as he. Neither of us would be caught dead shirtless on TV. We laughed at the idea of all three of us enjoying a warm morning in East Los Angeles, shirtless for the camera while talking about murder.

Rod went on to appear in about a dozen (exaggeration) A&E specials, yet could always be heard complaining about the camera crews. Some of us believed he secretly embraced it. A mere sergeant at the time, he would soon promote through the ranks. If I’m not mistaken, I believe he outranked General Mattis by the time he retired.

But I still call him Sergeant Kusch.

23 thoughts on “Murder in the Alps”