Daryl “Deedub” Knight and I have shared many adventures over the years: hunting and fishing trips, rodeos and roundups, and more than a few mad dashes to Vegas back in the day. But the most memorable trip for me was the one we call the Great Cowboy Road Trip of 2016, and just wait until you read how it ended!

First, let me tell you about Deedub, in case you don’t know him. We met in 1984 when we were both young deputies. Raised in Colorado, ol’ Deedub was a rodeo clown and bullfighter, and I had always been a cowboy at heart. So we hit it off right away and have been best of friends ever since.

The year we decided to do the road trip, I had recently finished fixing up an old truck—a very sought after, rare, 1993 12-valve Cummins “First Gen” Dodge, for all you motorheads—and I wanted to get it out on the road. Most of the time it sat with a long gooseneck horse trailer used to get me to and from rodeos and jackpot ropings and various ranches where I’d help friends with their cattle. Other times it might have a flatbed trailer behind it pulling several tons of hay. But now it was clean and pretty, I wanted to go cross country without a load, jamming gears and blasting tunes while chugging through the beautiful landscape of rural America.

Deedub said, “Really? Ol’ Silky?” He’d ridden in her more than a few times and wasn’t exactly impressed, having grown accustomed to more “comfortable” trucks in his old (grumpy) age. “You can’t bring your other rig?” (A 2004 Dodge diesel that doesn’t ride like a dump truck.)

“No, I can’t. I want to drive Ol’ Silky. (Deedub calls her Ol’ Silky; we call her the Cherry Bomb.) And if you complain, I’ll strap a recliner on the back and that’s where you’ll ride.”

I packed up my cowboy teepee and a bedroll, at Deedub’s insistence, so that we could do some camping during the road trip.

It’s a two-day trip from my place in Idaho to his in Arkansas. I stopped over outside Cheyenne, Wyoming, opting for a cheap and dirty motel rather than bothering with the tent. I slept a few hours and on I went.

The first night at Deedub’s he threw a “shindig” at his place, and the Poindexter boys—a wild bunch of cowboy Indians—and their gals arrived in pickup trucks and unloaded guitars and amplifiers and microphones while Deedub darted from his pot of beans in the kitchen to the barbeque he had going out on the back deck. Randall Davis, a topnotch cowboy and horse trainer who manages a large ranch in Oklahoma, showed up, his bright smile lighting the room. The gentleman cowboy Ronnie Bishop (RIP, pard) and his lovely bride showed up too, and not long after, Ronnie blessed our meal. We ate, and then those Poindexter boys began strumming and picking and singing down-home country music, and by the end of the evening, I felt as if I had known each of them my whole life.

I had brought a 2×6 board that fits nicely across the bed of my truck, with the intention of collecting brands of the outfits we’d visit throughout our journey.

Jim Poindexter was the first to put his iron on it, the OS brand from his Osage Springs Cattle Company in Hiwasse, Arkansas. Brother Bill Poindexter (RIP) graced the board with his Bell-E-Up brand from his home in the Cherokee Nation—Sallisaw, Oklahoma. Donnie Poindexter burned his Double Ds, followed by Ronnie Bishop’s RB brand that has been worn by some of the finest saddle horses ever made in that part of the country.

The next day we headed to the Honey Creek Cattle Company, a border outfit with pastures in three states: Arkansas, Oklahoma, and Missouri. At the time, Randall Davis was the cowboss there, and he showed us around and told us some great cowboy tales. One in particular involving a snorty colt and a yearling cow that gave the wayward steed an education. “I got that wild yearling roped and stepped off that colt to let the two of them work things out, see what’s what.” 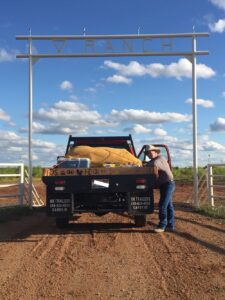 Next stop: Guthrie, Texas. We pulled into the Triangle Ranch and were greeted by Tyson Johnson, the cowboss, who welcomed us and showed us around.

It was a typical West Texas cow outfit, rough country and tough cowboys, a place where a good hand might be thought of as “punchy.” Tyson burned the Triangle brand onto the board before we unrolled our beds in their bunkhouse for a good night’s sleep.

The big hit of the road trip was the Four Sixes Ranch, a place recently made famous by the TV series Yellowstone, but well known to cowboys, race fans, and those in the horse world for many generations. It was a place I longed to visit, and I wasn’t disappointed.

The Four Sixes staff welcomed us as if it had been a scheduled visit with someone important rather than two old drifters popping in unannounced.

They gave us a grand tour of the facility, including the stud barn, the broodmare barn, the collection room, and the vet barn where bred mares are monitored closely during that time of year—spring.

Perhaps the most famous “Sixes” horse of all times is Dash for Cash, a legend on the racetrack (winning 21 of his 25 races) and the sire of a thousand foals, three-quarters of which were winners on the track themselves.

It was cool to see that the ranch maintains his stall in memoriam.

Having started and owned a colt from his bloodlines, and having a couple of other horses from Peppy San Badger lines, seeing this stallion’s stall (in memoriam) was another honor for me.

After the tour, we were invited to join the Sixes crew for dinner (lunch) at the cookhouse.

The meal was terrific and the company even better, because there are few things as splendid as Texas hospitality.

We finished dinner, expressed our gratitude, and before we said goodbye, one of the wranglers burned the Four Sixes brand onto my board.

We missed the crew at the Pitchfork Ranch as they were a long way from headquarters, branding calves.

But the self-proclaimed bookkeeper of the outfit wasn’t about to let us leave without a tour of their museum and a helping of ranch history.

Of course, she also made sure their famous Pitchfork brand was put on our board, which was no simple task since most of the irons were out with the cowboys.

Our next stop was short but sweet. At the famous Matador Ranch, we were met by James Palmer, a cowboy who has been with the Matador for over 40 years.

Now he’s a full-time “Compliance Man,” working to navigate the government red tape and endless environmental regulations that the Obama administration put in place to, in his words, try and force ranchers out of business. It was almost sad to hear how ranching has changed due to political maneuvering, but an interesting and educational hour visit with a wise old cowboy. We got the famous Drag V brand of the Matador burned onto the board, and we headed north.

Rest of the Road Trip

We checked in to a motel in Dumas TX, again foregoing the teepee and bedrolls I had hauled a couple of thousand miles at Deedub’s insistence.

While relaxing that evening, we debated our plans for the next day. We were conflicted about whether to head for the Apishapa Ranch (The original Charlie Goodnight outfit in Colorado) and then go on to visit a friend in Cheyenne or to head for the Bell Ranch in New Mexico.

My mare at home was due to foal any day, and I wanted to be there for the birth and to imprint the foal. Between that and the weather forecast, we decided to head north and west and go through Black Mesa Canyon from Kenton Oklahoma to Folsom, New Mexico, over to Raton, and then north on I-25 over the pass into Colorado where we could take I-50 west and come out in Grand Junction. Hopefully south of the snow.

We made a good decision. I thoroughly enjoyed the drive through the canyon and got a firsthand look at the “Goodnight-Loving” country. (Charles Goodnight and Oliver Loving are historic figures of the West, having trailed their cattle from Texas to Colorado when Mexican bandits and Apache and Comanche Indian tribes were forces to be reckoned with. There are numerous books written about them and even a song sung by Clint Black.) It was several hours of driving on dirt and clay roads through some of the most picturesque country I’d ever seen. (It’s also country without services: no cell signals, filling stations, rest stops—not a venture for the unprepared. And I hope it always stays that way.)

During that part of the trip we happened on the Cross L Ranch where we stopped and met the owner. We told him about our trip and showed him my branding board, and he was proud to burn his brand alongside some of the legendary irons that had graced it by then.

The trip was almost done. We had collected eleven brands on the board, met some great people, and learned a lot about some of the legendary ranches across the land.

But now we had to get over the treacherous Monarch Pass on I-50 in Colorado, and we didn’t get there before the storm. 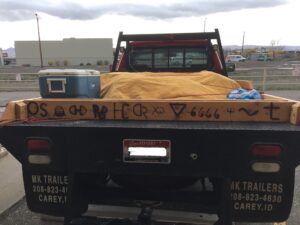 We snaked our way up and over the 11,000-foot pass through howling winds and heavy snow blowing sideways, which severely limited our visibility and brought our travel to nearly a crawl.

Eventually, we made it to the bottom and were able to pull over and chisel the caked snow off our nearly useless headlights. (Warning for those considering aftermarket LED headlights—they don’t heat up and melt snow!)

We spent the last night in Grand Junction, Colorado, opting for a nice warm motel room and maintaining our perfect record of never once pitching the teepee that just had to go with us.

Last Leg of the Road Trip

With the last leg ahead of us, we woke to a flat tire. But we got it fixed, fueled up, and with volumes of caffeine, we were sailing down the road yet again.

We pulled into the not-so-famous Rafter S (my brand) late the next evening. Early the next morning, we sat on the porch drinking coffee and relishing our trip when my mare, Lil, foaled twenty-five yards from where we sat, watching.

Our old boy Ben, a gelding, stood watching also, though at times too close for Lil’s comfort. She gave him a few kicks to let him know.

Soon after, the filly I would later name Baby Doll was on the ground, imprinted, and starting an adventure of her own.

It was a perfect ending to a memorable road trip with a damn good partner.