Frederick Reynolds is a retired Los Angeles County homicide detective and former Compton police officer. Today he joins us to discuss his illustrious and meritorious career, his love of writing, and his newly released law enforcement memoir, BLACK, WHITE, AND GRAY ALL OVER. Join me in welcoming Fred.

Q: Fred, let’s start by you telling us about your law enforcement background. 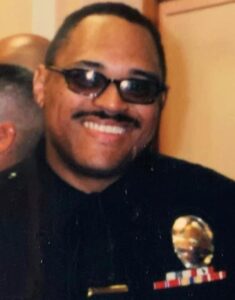 A: I was a cop for 32 years, all in Los Angeles County. I started my career with the Compton police department in November 1985 and attended LA Sheriff’s academy class #229. I graduated on Valentine’s Day 1986, a member of the “love class.”

I worked for Compton PD from that time until September 17, 2000, when the city contracted out with the sheriff’s department. While a member of Compton PD, I worked patrol, gangs, was an FTO (Field Training Officer), a robbery detective, a homicide detective, and then was promoted to sergeant, a patrol sergeant, and finally a detective sergeant. For the last year of the department’s existence, I was the supervisor in charge of the homicide unit.

After the sheriff’s department took over the policing of Compton, I was a patrol sergeant at Compton station for about two months before transferring to Lomita station where I worked for a year. During that time, on my off-days, I wrote a 640-page memorandum documenting the most violent gang members, current gang rivalries, and synopsizing about 300 gang murders and other murders that could be possibly solved with a little work. I made three copies: one for homicide, one for OSS (Operations Safe Streets, LASD gang detail), and one for the commanding officer of Compton station. After word got out about what I had done, the CO of OSS reached out to me and I went to OSS where I worked at Century Station as the GET (Gang Enforcement Team) sergeant and the supervisor of the Florencia 13 (Hispanic street gang) Task Force for a little over a year.

After Century station I went to Carson station, where I had the OSS team for five years, then to Compton OSS for three years. When the operations lieutenant at Compton station got promoted to Captain, his first command was IAB (Internal Affairs Bureau). He personally requested that I come work for him, so I did. That is the ONLY way I would have ever worked IAB. He was a good man, and he gave me everything I needed to be successful at Compton station, so I felt beholden to him. After a year at IAB, several captains and at least one chief suggested that I apply for homicide. I had been turned down three times before, so I was hesitant. The fourth time was a charm, and I worked homicide from 2012 until I retired in November of 2017.

Q: What was your favorite assignment and why?

A: Although homicide was certainly the most glamorous assignment, I loved working the gang unit the most, hands down. Gang members are the most violent criminals in L.A. County and responsible for the overwhelming majority of not only violent crimes but property crimes, too. In working gangs, we ended up solving a lot of murders for the homicide detectives. Working gangs also provided me with an opportunity to be in the streets, and forge relationships with not only gang members but citizens as well. Not all gang members are evil and violent. Some of them are caught up in neighborhood politics and are looking for ways out. I was always able to exploit that need to our mutual advantage.

Q: And the worst assignment and why?

A: IAB by far! I hated investigating good deputies who had gotten in trouble for stupid shit like whistling at female deputies, driving drunk, or fighting each other. I know there is a need for a unit like that, but I felt as if I was wasting my talents on catching good guys and girls in lies while evil ran amok in the streets. 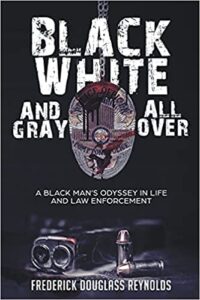 Q: BLACK, WHITE, AND GRAY ALL OVER is a law enforcement memoir. The prologue, which I have read, is centered on the day that Compton P.D. officers Kevin Burrell and James MacDonald were shot and killed in the line of duty. Is this book primarily about that terrible night, or is it more autobiographical?

A: It is more autobiographical. BLACK, WHITE, AND GRAY ALL OVER is mainly about my personal life as it interwove with my professional one. I discuss a childhood that was somewhat troubled, and of course, the racism that I had to overcome throughout my life. These are uneasy times and in order for the reader to understand who I am and how I got to where I ended up, the reader has to walk in my shoes and see things through lenses that weren’t always rose-colored. Although I know that racism is a problem in this country, I don’t believe that it is suffocating to the extent the media would have us believe. I believe that this is the greatest country in the world, and I am proud to be an American. Still, for the George Floyd situation to have blown up like it did, there were clearly unresolved racial issues that we as countrymen and -women should have confronted long before then.

Q: When did you start writing?

A: I was very smart in school and always had a talent for it. I probably started writing stories about comic book heroes when I was nine or ten; I started reading when I was three.

Q: I had no idea that I would someday write, and if I had, I would have kept a journal throughout my career. Was writing something you always knew you wanted to do, or did your story just demand to be told and drove you to the keyboard?

A: I started writing this memoir about twenty years ago. I had the name before I even put pen to paper. I chose the title because my life has never been about Black and White. It always seemed like I lived in the gray area. Cop cars are Black and White, there was an issue between Blacks and Whites, and I believed that in order to bridge that gap, we had to somehow become one, and Gray comes from a mixture of black and white.

Q: Your career path guided you to the Los Angeles County Sheriff’s Homicide Bureau, a place and assignment of which I am proud to have worked myself. Do you have plans to write about any of the cases you handled while working there?

A: Yes. I have two really good gang cases that I want to write about.

Q: What about fiction? Any interest at all in writing it?

A: Yes. I am concerned with the lack of interest about all the missing children in the country. I plan on writing a fictional novel about a cabal of child serial killers.

A: Losing weight and getting healthy. I had a heart attack in the beginning of 2020. The doctor told me it had been building up for years. It was almost as if when I stopped going a mile a minute, my body went into shock.

Q: Good on you, brother. The job can be a silent killer, my friend. What about hobbies and interests?

A: Well, we were traveling a lot prior to 2020. I love traveling, reading, and writing. I am also a pretty good artist and prefer drawing athletes.

A: Edgar Allen Poe, of course. Although not widely known, he is considered the father of the detective novel.

A: Remy Martin XO these days, because I can actually afford it.

Q: Where can everyone find your memoir, BLACK, WHITE, AND GRAY ALL OVER?

A: It is now available on Amazon.

Q: Last question: Do you have any events planned, such as a book release party or forthcoming book signings?

A: Well, with this Covid bullshit controlling everything we do, I plan on at least having a book release party at my house. We’ll have to play everything else by ear.

Q: Thank you, Fred. It has been a real pleasure and honor getting to know you better. Best of luck with your book and all future endeavors.

A: My pleasure, Bulldog.

Buy BLACK, WHITE, AND GRAY ALL OVER here!