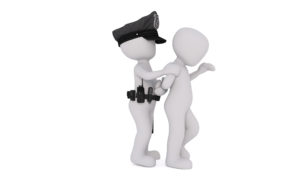 Crimes are often deterred by only to the watchful eyes of off-duty cops. An officer’s demeanor, command presence, can at times, make a crook think twice.

Most departments don’t require off-duty officers to take action when crimes occur in their presence. Generally, the cop is only encouraged to be a good witnesses rather than physically interceding in a situation. However, most cops are willing to risk their personal safety to stop crimes, especially violent crimes where innocent people might otherwise be harmed, or worse.

The counties and cities of America have never budgeted for adequate law enforcement on the streets, in the schools, or throughout our nation’s jails and prisons. It simply has not been a priority for the politicians who choose how your tax dollars are spent, though they themselves enjoy private security at your expense.

I was involved in several off-duty incidents throughout my career. Some were reported, some were not. A good friend of mine (whose initials are J.B.) used to say, “There’s no sense in waiting around for the authorities to come thank us for a job well done.”

Bad Man with an Ax 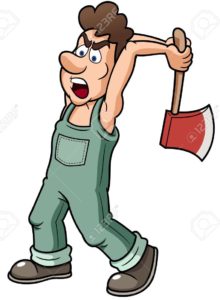 He uttered those exact words one night after we thwarted an attack by a gang member who, while armed with an ax, charged us. The gangster was within seconds and steps of being killed by our gunfire when he seemed to have a moment of clarity. The incident had created too much of a spectacle to shake off, so we reported the off-duty incident per department policy, against my friend’s instinct. It turns out, J.B. was right; the authorities were less than thankful for our efforts.

On another occasion, I was having lunch with my wife and kids. We were in Palmdale, a town in Los Angeles County that used to be home to ranchers, farmers, and employees of the aerospace industry. The most dangerous species in Palmdale back when I was a kid was rattlesnakes. But over the years, Palmdale and Lancaster, and other assorted communities throughout the county, had become infested with gangs and had realized dramatic rises in violent crime. Suddenly, it was no longer safe to take your kids to Del Taco for lunch in Palmdale. 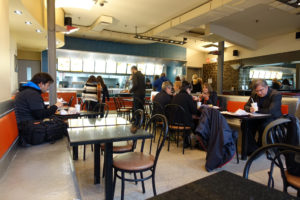 On the day in question, two young men came in to rob the place. How did I know? Well, for one, they wore bulky coats though it was a warm day. Secondly, I just did. Yes, it’s called profiling. Experience. Instinct. Woman’s intuition—whatever. It’s just something that every good street cop has naturally or develops over the years on the streets. These two punks came in to pull a stickup job (how’s that for noir?), and only three of us in the whole place knew it.

One of the two took a position just inside the door and began scanning the dining area. The other approached the cashier. I had observed them before they entered, and my eyes were glued on them. The lookout man at the door met my stare, and he knew. He could see it in my eyes and he knew what was about to happen if this went down. I didn’t want it to go down, especially with my family present. My plan was to move from my location so as to not draw fire near my family, while engaging the suspects as needed. It was the best I could come up with given the terrible predicament in which I found myself.

The one who approached the cashier looked back to the gangster who had stayed at the door. He was likely checking in with him before making his move. The doorman shook him off the way a pitcher shakes off his catcher’s signal for the curveball. Doorman nodded his head in my direction. The second man looked over and found me immediately, and we stared at each other for a moment. He too knew at that time who I was.

An excerpt from my debut novel, A Good Bunch of Men:  A cop tends to study everyone and everything, as does the predator. The two of them, in a crowd of a hundred, will often recognize one another, while the other ninety-eight remain oblivious to the presence—or threat—of either one.

At that moment a good decision was made by two bad men. It was likely one of the smartest decisions either had ever made. But it had no doubt been made from a natural instinct. See, predators don’t look for fights, they search for easy prey. This time, there was a sheepdog watching, and they recognized the trouble it would bring them.

The stickup man at the counter walked back to join his partner, and the two of them walked out briskly without looking back. They had apparently lost their appetites.

When I was a young deputy fresh out of the academy, a colleague of mine shot and killed a man while attending church services in Chinatown. A gunman had entered the church and approached the front from a side aisle while services were in progress. The man stopped, pulled a gun, and shot and killed the clergyman who stood at the podium.

As all of the other parishioners hit the ground, the off-duty deputy took a position of cover, leveled his two-inch revolver at the bad man, and shot and killed him before he could harm anyone else. The deputy no doubt saved other lives that day by the actions he took, yet he paid a heavy toll; his short career ended as a result as he was deeply troubled by the incident and its aftermath. 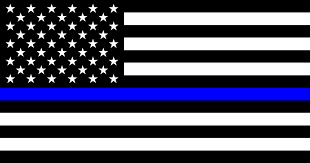 “The thin blue line” is described as the separation of order from chaos due to a law enforcement presence. Cops taking action while off duty, risking their lives and sometimes the lives of their loved ones, demonstrates the commitment to law and order that nearly every single cop has. Think about that: off-duty cops, not on the clock, not being paid, risking their lives for strangers, usually without a second thought of doing so.

May God bless and protect our law enforcement officers.

Don’t forget to share this blog with your family and friends!

7 thoughts on “Heroism in the Homeland: Off-duty Cops take Action”