Did anyone see that vicious assault last week in the NFL? The one that should have resulted in an arrest and prosecution, but won’t even get the player banned from the NFL?

No Longer a Fan of the NFL

First, let me be clear: I no longer watch the NFL, and I don’t miss it one bit. Raised as a Rams fan, I switched to the Packers when the Rams left Los Angeles. I’ve been to more than a dozen NFL games in Los Angeles and Anaheim, and I’ve even been to Lambeau Field to see my beloved Packers.

But once that moron Kaepernick began disrespecting our nation, our flag, and our men and women in uniform—military and police—my lifelong love affair with professional football began to wane. The next year, on opening day, when the spoiled children who are the faces of today’s NFL chose to not only take knees but to also pull their little “hands up, don’t shoot” routine, I was done. Divorced. No más.

Unacceptable Conduct in the NFL

The players are employees of the NFL. Fans come to watch them play, not to hear (or see) their political opinions.

As a deputy sheriff, I was not allowed to express my political opinions at work or while representing my department, and that was an appropriate rule. Too bad it wasn’t equally enforced.

Back to the deadly assault that most of us have now seen on the internet. 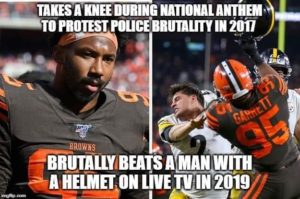 The player is a thug named Myles Garrett who is a defensive end for the Cleveland Browns. (They still have a team?) He also happens to be one of the players who took a knee as a way of protesting “police brutality.” At any rate, during the game last week against the Pittsburgh Steelers, he ripped the helmet off quarterback Mason Rudolph’s head and used it as a weapon against him.

Garrett swung the helmet with all his might and struck the intended target: Rudolph’s head. It was a blow that could have resulted in severe head trauma. In some cases, a blow like that could lead to death. That makes the helmet a deadly weapon as defined in most state statutes.

Where is the Justice?

Yet our criminal justice system stays out of the fray, allowing this criminal conduct to go unchecked, so long as it involves athletes.

If a police officer witnessed such an event on any street in America, he/she would be compelled by law to make a felony arrest of the aggressor. The local prosecutor would likely file felony charges on the defendant—especially if a video of the event was available—regardless of whether or not the victim wanted to press charges.

Conversely, imagine what would happen to a police officer if, during civil unrest, he removed his riot helmet and El Kabonged a protester on the head. Prosecutors and politicians would trample over each other trying to get in front of cameras to announce that charges would be sought against said officer. The officer would be crucified by the media. There would be protests, and thugs like Garrett would take a knee to demonstrate his opposition to police violence.

There are no exceptions in any state’s penal code or statutes (at least of which I am aware) that allow for criminal conduct to be permissible in the form of sports or entertainment.

So why is such conduct allowed to go unpunished?

Money? Entertainment? Or, is it something far more cynical than that? Is society hesitant to call out that behavior because of who it is committing it? Sort of like Jussie Smollett not being charged for the crimes he committed by filing a false report of a hate crime and whipping the left into a frenzy.

Rule 12, Section 2, Article 17 of the NFL rulebook, entitled “USE OF HELMET AS A WEAPON” states: “A player may not use a helmet that is no longer worn by anyone as a weapon to strike, swing at, or throw at an opponent.”

The penalty for any such violation is a loss of fifteen yards and automatic disqualification.

Currently, the thug-in-question is suspended. But he won’t lose his job with the NFL, and he certainly will not face criminal charges. He will continue to make millions, though he should be in prison with his ilk.

In Ohio, a person commits felonious assault when he or she knowingly causes serious harm or when he or she “knowingly causes or attempts to cause physical harm to another or another unborn child by means of a deadly weapon or a dangerous ordnance” (ORC 2903.11). A deadly weapon, as described in this statute, is “any instrument, device, or thing capable of inflicting death and that is either: (i) designed or adapted for use as a weapon; or (ii) possessed or used as a weapon.”

Thus, anything such as a ballpoint pen, a motor vehicle, or a firearm can be considered a deadly weapon under Ohio law. Even a helmet.

So clearly, Garrett committed a felony in Cleveland, Ohio, as documented on video and witnessed by thousands. Where are the prosecutors?

No Real Loss for Me

I understand that many of my friends still support the NFL. Personally, I cannot and will not. I view it as a bad relationship; I miss her in some ways but know that I’m better off without her.

The good news is, the NFR starts tomorrow. Professional hockey is going strong, and spring training (MLB) is around the corner. You won’t see any of the athletes in these sports taking a knee during the National Anthem anytime soon, if ever.

15 thoughts on “The Disgraceful NFL”