THE NIGHT POLICE is the debut novel of my good friends and fellow authors, Chris Berg and Paul James Smith. 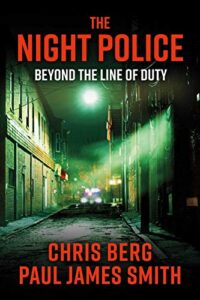 Based on real-life events, THE NIGHT POLICE is a deeply complex, page-turning anthology. These thematically linked short stories reunite five warrior lawmen for a cathartic night of drinking, a homecoming of sorts. Instead, they are sucked into a violent tale that unburies the past. No one escapes unscathed.

Berg and Smith publish stories that didn’t make the final cut of THE NIGHT POLICE, on their blog.

I find the stories on their blog to be engaging and entertaining. Their latest post, LET ME MAKE THIS RIGHT, is a raw, authentic glimpse into the world of undercover narcotics investigations. It’s the middle-of-the-night wakeups, the managing of informants, and the entertaining the criminals who would one day be shocked by the revelation of with whom they had been partying.

In 1977 Chris became the third generation of his family to sign on as a lawman. Serving as a patrol officer, evidence technician (long before CSI was a thing), and vice/intelligence detective it was his posting as an undercover narcotics agent that fit him best. He relished the life of hand to hand undercover drug “buys”, clandestine lab investigations and the requisite counterfeit persona. Chris still revels in the adventures and friendships that come with being part of the police fraternity.

After retiring due to injury, Chris had a successful second career in corporate America and… it bored him to death. The high point of that life was traveling the world; Malaysia, Dubai, Beijing, Moscow, Rio, Hong Kong and much more. Still, that world was never a fit, not for an ex-Night Policeman.

Chris and his wife Janet now call Florida and Boston home. Their daughter Kelsey, currently in grad school, is likely the fourth generation of law enforcement in the family. Chris keeps up with his passions: baseball, fishing, and all things cooking and BBQ, not necessarily in that order.

Paul served community and country in a variety of pursuits from age 19 to age 59. After completely flunking out at San Diego State, a Marine Corps recruiter handily outsmarted him, and he fell for the old “aviation guarantee.” This launched a long and checkered career of service as an enlisted marine, a local lawman, Federal Agent, and reserve Coast Guard officer where his assignments included command of two expeditionary units, Commander, Maritime Security Force, Guantanamo Bay, and four wartime deployments to the Persian Gulf.

After retiring from active service, Paul and his wife Kay ran a gun shop in Alaska for a few years. He built custom rifles, and they collectively lost their minds to boredom. They now live at the edge of Puget Sound in the Pacific Northwest, he writes, she gardens, together they go Dungeness crabbing from their kayak. They are enjoying life to the fullest.

In the early 80s in this part of the country, coke was king. Not crack or any other permutation since then, just good old-fashioned powdered form, cocaine. If you were leaning towards young and you weren’t cloistered away in the Tengboche Buddhist monastery in Nepal, it was damn near impossible not to bang into it. You would see it everywhere, be it the tight bodied blonde clubber in a crotch high mini, a “Got Milk?” mustache quickly wiped away. It was likely the Jack and Jill hunched over the center console of their Toyota Corolla, desperately trying to get the last taste out of a half gram bindle. Maybe the racquetball queen, in those smokin’ spandex shorts, snorting a line off the gym sink. On her way to peak wellness. Hell, it could just as easily be the “lost in the 60s” hippie grandma and her moon child sharing a bullet of blow. Trust me, it was everywhere and anywhere.

To the dope dealers of the day, that meant substantial commercial opportunity. Who gives a fuck what it meant to the street level consumer, right? It was a victimless crime, right? It was so easy for our useless politicians and the press to ignore the death spiral caused up the food chain. The privileged Hollywood machine was right there with its righteous indignation about any attack on their drug of choice.

It is and never was a victimless crime, and the politicos, the press and Hollywood were and are so ignorant and complicit in the effects of this and any other popular drug they glamorize or excuse. Fuck them.

Now if you happened to be a narc, it meant that a good portion of your time would be spent interdicting this illicit El Dorado. Agents up and down the narco ecosystem, street buyers in Bogalusa, Louisiana, or Fairbanks, Alaska to the gritty, sweaty DEA in Bolivia; we all shared this one thing in common. Narcotics enforcement was one mitigation that kept drugs from being the catalyst for exponential deterioration of the American way of life. I know that may sound overly dramatic, but I believed it then and I believe it now. Continue reading…

6 thoughts on “The Night Police”