On a warm L.A. morning, the first day of October 1987, Johnny Babbitt and I were working as radio car partners assigned to Firestone Station. Neither of us could have been any happier.

Our friendship predated the department. We were hired and put through the academy together. Once graduated, we worked custody together. A couple of years later we transferred to Firestone Station together, landing two of the five available spots. We joked that we had joined the department on the “buddy system” and could not be separated.

After completing the grueling, six-month training program, we each bounced around working with different people before we were able to hook up as partners. We were living some of the best days of our lives.

At 7:42 a.m., our world was rocked, literally. As it was for all Angelenos. The most powerful earthquake to hit Los Angeles since 1971 had struck, registering 5.9 on the Richter scale. It would be dubbed the Whittier Narrows earthquake, and leave in its wake eight people dead and another two-hundred injured.

Johnny and I had stood eating breakfast on the hood of our radio car in the parking lot of Spartan Burgers. (There were no better breakfast burritos in a ten-mile radius.) Though not the most scenic destination in Los Angeles, Spartan Burgers did offer a great view of the Tiki Motel, located directly across the street. 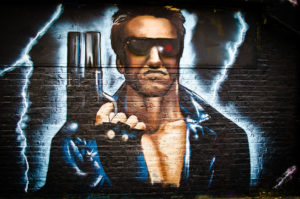 While Spartan Burgers was famous for one thing only—great burritos—the Tiki Motel was famous for two: The Arnold Schwarzenegger movie Terminator, and heroin addicts. But the cast of movie stars, directors, and cameramen had moved on, and all that remained were the hordes of hypes (heroin addicts) and jumbo cockroaches.

Both having been raised in Southern California, Johnny and I were familiar with earthquakes. As the ground shook, our eyes met. Each of us immediately recognized the gravity of the situation.

When the initial jolt subsided and only shaking still remained, Johnny’s eyes grew large and his gaze drifted beyond me with great interest.

The quake was felt as far south as San Diego, and north to San Luis Obispo. It was reportedly felt in Las Vegas, Nevada. Remarkably, the violent jolt and its continued shaking stirred addicts and roaches alike, and each began scurrying from the darkest crevices of the Tiki Motel. Men and women with pinpointed pupils and scars from intravenous drug use were suddenly amassed in public, the sight of which had captivated my partner.

He set his burrito on the hood of our car, the dining table to ghetto cops of that era, and started across the street. I reluctantly followed, asking, “What the hell are you doing, Johnny?”

“You’re arresting hypes during an earthquake?”

Firestone Deputies on the Hunt

Firestone deputies abhorred day shift. Most stations, you had to earn seniority to avoid working nights. At Firestone, the opposite was true. Deputies who chose to work Firestone did so for the action. There was a high level of activity—crime and violence. It was said that you weren’t a real cop unless half of your shift fell during the hours of darkness.

For day shift deputies, the end of their shifts found the gangsters, dope-dealers, and killers just waking up and starting to move about. Hypes, on the other hand, needed their breakfasts. Meaning, they needed to score heroin first thing in the morning to “get well.”

When heroin addicts come down from their highs, they become sick with symptoms resembling the flu. Only more heroin will make them feel better. After they got well, and once the euphoric high dissipated, hypes needed to get to work, stealing to support their habit.

Most daytime burglaries are committed by hypes. “Arrest a hype, you’ve taken a burglar off the street.” Dayshift deputies found hypes to be the best source of entertainment.

Just then a car abruptly turned into the lot and stopped next to us. It was a nurse who worked downtown. I knew her. She was frightened and asked what we knew about the shaker. It was enough of a distraction to keep my partner from loading the back of our car with Under the Influence arrests—for the moment. As we finished assuring Sandy it was safe to continue her travels, our radio began crackling with emergency traffic. Fires, medical emergencies, and general panic had struck our jurisdiction.

Johnny looked like a kicked dog as we silently retreated to our radio car, foregoing our cleanup of the famed Tiki Motel.

We spent the next several hours responding from one emergency call to another. Everyone did. On one such call, we found an apartment building engulfed in flames. There were people running out, but others running in. They were going back into a burning building for material possessions! (Babbitt tells a more humorous version of this, privately.)

Johnny and I ran inside the smoke-filled building several times to push, pull, and prod these residents to safety. Eventually, the fire department arrived and took over their fire-fighting duties (yawn). We drove over their hoses and headed to the next emergency.

The field sergeant had heard of our heroic efforts. He would make a notation in the “black book,” a book filled with both good and bad notations to be used in preparing annual evaluations. But that was it. No medals, fanfare, nor passes on our next screwup, which would surely come. Just a note in a book long since forgotten, stating we had risked our lives running into a burning building. The notation didn’t even make clear that we had done so several times, and that we had brought residents to safety.

Firestone could be funny that way.

Emergency Operations protocol was enacted and remained in effect for several days. Many of the residents refused to go back to their homes for weeks, for fear of the buildings collapsing. The parks became campgrounds, and once the rumbling stopped, the crime resumed. Now there were more vulnerable people and vacated buildings on which the predators could prey.

Which meant we remained too busy for misdemeanor arrests in the following days. The hypes were left to their devices, free to inject opiates and steal from their neighbors to support their habits. Firestone deputies were too busy to worry about them, even as they remained in plain view.

And Johnny was none too happy about any of it.